Combining modern dance, Peking Opera, Kung-fu, and traditional Chinese music, Under Siege is inspired by an ancient Chinese story of the final battle between two kings, Xiang Yu and Liu Bang. The story was immortalized in a 1993 film version, ‘Farewell My Concubine’ by Cheng Kaige.

Both Choreographer Yang Liping, and stage designer Tim Yip want to explore a Chinese way of expression in dance. “Though our body structure is Chinese” says Yang, “we can see an imitation of Western movement in our bodies. We don’t have our own dancing language. I think Peking Opera is the highlight of Chinese dance. The styles it uses, including singing, dance, stage speech, and Kung-fu are classical.”

Traditional Chinese art forms combine with contemporary techniques to create a surprisingly theatrical work. Liping weaves into her performance elements stylistic of Peking Opera, from the elaborate headdresses and masks worn by the company to the dramatic rise and fall of the narrator’s carrying voice.

The action, based on the story of the besieged warlord Xiang Yu and his self-sacrificing concubine, was tough to follow and it was far too long (two hours, no interval), but my goodness it was gorgeous.

It’s hard to think of a more visually ravishing production this year than Yang Liping’s Under Siege. It’s based on the historic, bloody battle between Chinese warlords Xiang Yu and Liu Bang, but Yang and her designer Tim Yip have distilled the material down to images of hallucinatory beauty. 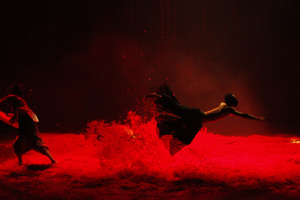 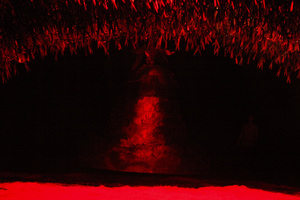 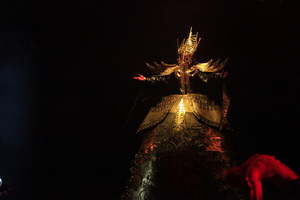 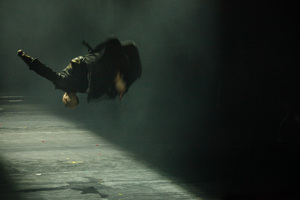